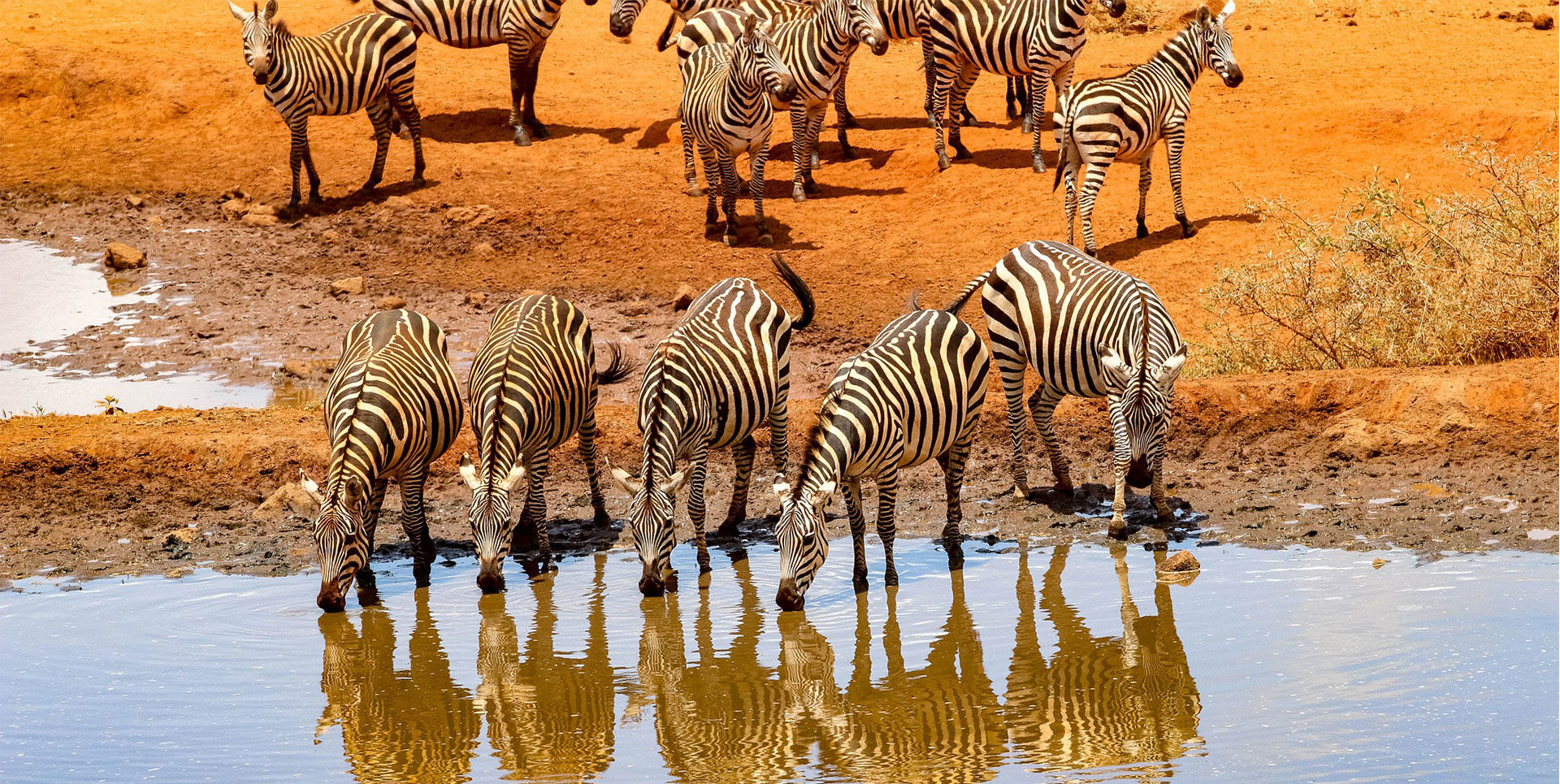 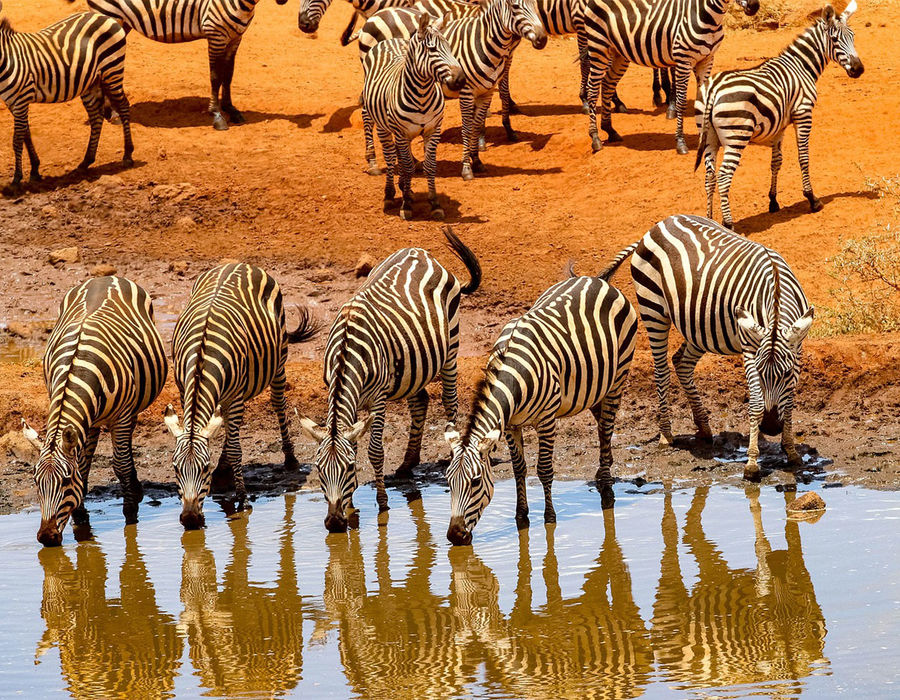 Escape in style and experience wildlife in great abundance and create memories of a lifetime. Book this trip today and get to explore Kenya's spectacular landscapes, natural beauty and huge variety of wildlife to be found in various game parks and wildlife reserves. Your accommodation is booked in delightful camps and lodges offering warm hospitality, very personalized and exclusive guest service that will make your visit both remarkable and exciting.

Your journey begins from Nairobi, the “place of cool waters” in Maasai language as you head off to Maasai Mara Game Reserve which is Kenya’s best game viewing spot owing to the nature and concentration of wild animals arriving for lunch at Ilkeliani Tented Camp which is nestled in a river glade in an area favourite for elephants coming to drink from the Talek River. Ilkeliani is set right on the banks of this river with all tents built on a raised position overlooking the river and offers commanding views of Maasai Mara across. All guest tents are well spaced out thereby ensuring maximum privacy. Each tent is carefully sited under its own cluster of shady indigenous trees giving guests a true feel of being out in the wilderness. The interiors are spacious and comfortable featuring a front veranda with a day bed and canvas safari chairs. The camp is surrounded by woodlands, water, and plenty wildlife that draws so many travellers to this region. After a warm welcome and delightful lunch, embark on afternoon game drive with your driver guide in Maasai Mara the ancestral home to the Maasai tribe.

Whole day game drive in Maasai Mara which is arguably the most outstanding safari destination in Kenya where over 450 animal species have been recorded. The park comprises of magnificent landscapes of open plains bisected by the Mara River and its tributaries and punctuated by marshes and forests. This world famous wildlife sanctuary is renowned for its huge population of lions, is home to all the “Big 5” and supports the highest density of wildlife to be seen anywhere. Easily seen here are lions, rhinos, hippos, crocodiles, giraffe, wildebeests, zebras, buffalo, warthogs, hyenas, jackals, wild dogs, buffalo, leopard, many kinds of antelopes and elephant. Visit Mara River where thousands of wildebeest and zebra are attacked by crocodiles as they attempt to cross this mighty river during the annual "Great Migration" which is today one of the world’s most spectacular natural events. Each year nearly two million wildebeest and accompanying large numbers of zebra and smaller numbers of Grant's gazelle, Thompson's gazelle, eland and impala trek from the Serengeti to the Maasai Mara and back again in search of fresh grazing. Following on their heels are the predators of the savannah, lion, cheetah, wild dog, jackal and hyena.

Breakfast and continue on with your journey to the picturesque Great Rift Valley arriving for lunch at The Cliff which is beautifully set right inside Lake Nakuru National Park. Lake Nakuru is a world famous for its enormous flocks of flamingo and over 400 species of birds. The lake is protected by the surrounding Lake Nakuru National Park which is a mixture of woodlands, bush and volcanic cliffs that make it a perfect habitat for huge variety of wildlife. At times the flamingos number in millions, which is quite a spectacular sight. They are so numerous that the lake appears to be ringed in pink. The lake has also earned reputation as an important haven for endangered species, particularly the Rothschild giraffe, Black and White rhinos.
The Cliff is perched at the top of 100 metre high rock face and is the newest and smartest addition in Lake Nakuru Park. It's a boutique luxury constructed and furnished in a contemporary European style. Each tent is built on solid foundations at the edge of the cliff and faces the lake, allowing guests 180 degree views of the panoramic paradise, yet maintaining total privacy.

After breakfast, depart for Amboseli National Reserve arriving for lunch at Satao Elerai Camp which enjoys a uniquely privileged position at the heart of this world-famous national reserve, providing very clear and uninterrupted views of Mount Kilimanjaro. Crowned by Mount Kilimanjaro, Africa’s highest peak combined with its excellent opportunities to view wide variety of wildlife makes Amboseli one of the most visited game parks in Kenya. Later in the afternoon, head out for a game drive returning back to the lodge for dinner.
Satao Elerai Camp is located in a quiet, unspoilt, unique setting in a 5000 acre private conservation area south east of Amboseli National Park. The camp looks down onto Amboseli National Park in one direction and up to Mt Kilimanjaro in the other direction, giving clients what is arguably the best location of any camp in Amboseli. The camp comprises of 12 luxury en suite mountain facing tents and 5 large luxurious lodge style suites and its unique setting in a wildlife conservancy offers guests a rare opportunity to view wildlife in private surroundings. In addition, clients can enjoy spectacular bush sundowners, night game drives and nature walks in the conservancy.

Today enjoy unlimited game drives in this magnificent park in specially adapted 4x4 safari vehicle. Amboseli comprises of grove of acacia trees and golden savannah plains. Close by are a series of emerald green swamps which are fed by the melting snows of Kilimanjaro providing sources of water to huge numbers of wallowing elephants, hippos, buffalos and plains game. Amboseli has an endless underground water supply filtered through thousands of feet of volcanic rock from Mount Kilimanjaro’s ice cap which funnel into two clear water springs in the heart of the park. With grasslands crossing Kenya and Tanzania border, this park is renowned and a popular choice to get close to huge herds of free-ranging African elephants. There are over 900 elephants in Amboseli as well as huge herds of wildebeests and many other animals including giraffe, lion, monkey, zebra, buffalos, jackals, hyena and antelopes. The name "Amboseli" comes from a Maasai word meaning "salty dust", and the park's Observation Hill provides some of the most magnificent sunsets over Kilimanjaro. 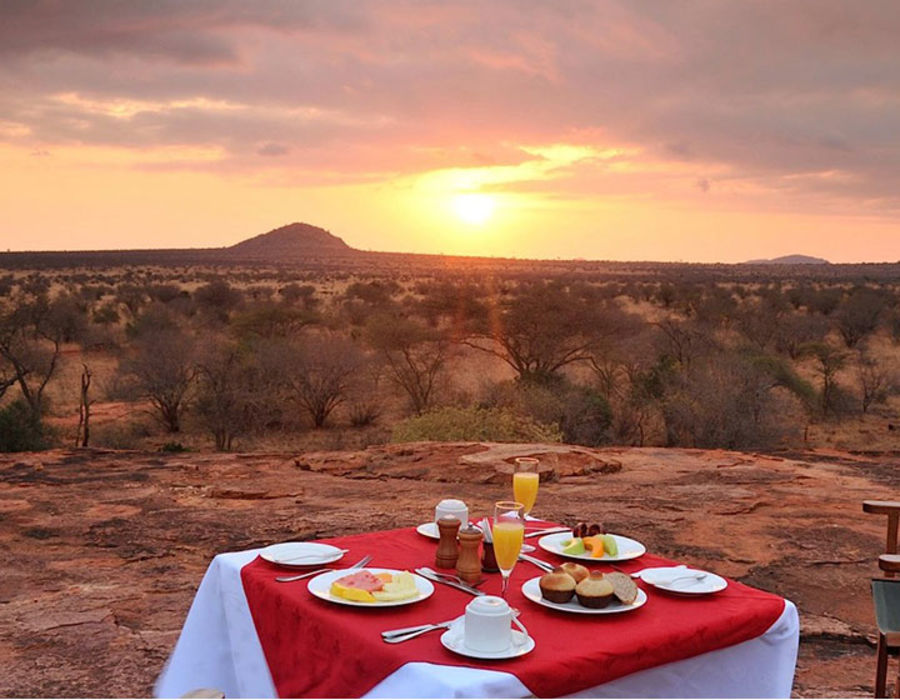 Breakfast depart for Tsavo West National Park arriving for lunch at Severin Safari Camp which is set deep within the vastness of Tsavo and is constructed in an elegant natural style. Each of the camp's 27 tents and suites offer sweeping views over the striking landscape and the nearby waterhole which is frequented day and night by all manner of wild game. With clear views of Mt Kilimanjaro in the background, Severin Camp offers a unique landscape with vast savannahs, wooded flood plains and the famous "red" elephants of Tsavo.
After lunch, it's time for the afternoon game drive in Tsavo which is globally well-known, first for its famous man-eating lions in the late 19th century and then for its devastating levels of poaching in the 1980s. Despite the latter, there’s still plenty of wildlife to be seen here, although you’ll have to work harder and be much more patient than in Amboseli or the Maasai Mara because the foliage is generally denser from the sight of fifty million gallons of crystal clear water gushing out from the under parched lava rock that is the Mzima Springs to the Shetani lava flows.

Whole day in Tsavo West with game drives. Tsavo is an amazing park and contains a diversity of habitats, wildlife and very attractive and scenic mountainous landscapes. Tsavo West National Park offers unrivalled full views of Mount Kilimanjaro in the background and is home to incredible spectacular Chyulu Hills to the north. Chyulu Range comprises of volcanic lava rock and ash which is too porous to allow rivers to flow. Instead, rain water percolates through the rock and may spend 25 years underground before emerging 50 kilometres away at Mzima Springs. Visit Mzima which is a series of four natural water springs located in the west of the Park and is one of Tsavo's most popular wildlife attractions owing to its resident populations of hippos and Nile crocodiles. Tsavo West offers some of the most magnificent game viewing in the world and is home to huge herds of "red elephants "of Tsavo. These elephants just appear red due to constantly dust-bathing with the park’s fine red volcanic soil. Tsavo is also home to rhino, hippos, lions, cheetah, leopards, antelopes, giraffe, buffalos and diverse plant and bird species.

Breakfast and drive back to Nairobi arriving in the afternoon. You will be dropped off either at your Nairobi Hotel or at the airport for your onward departure flight.

What about adding few days in Diani beach for a much deserved beach escape to enjoy uninterrupted sunshine, indulge in barefoot luxury in the azure, crystal clear and warm waters of the Indian Ocean?

Diani is a timeless destination and one of Kenya's best secrets. It lies south coast of Mombasa, on one of the most beautiful and spectacular beaches ever seen on earth.

We can always assist to secure your reservations including local flights in one of our partner beach resorts at our negotiated, very affordable and competitive rates. Email us now. You will be delighted to hear about the current special offers.